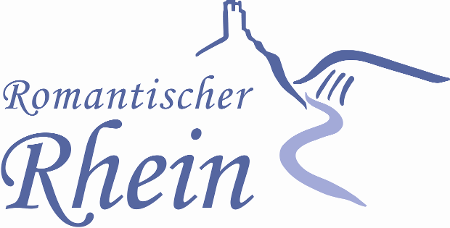 In 1823 the ruined Vautsberg Castle and its rock were acquired by Friedrich Ludwig Prince of Prussia who erected Burg Rheinstein, the first new castle of the Rheinromantik era. He entertained guests here, including Queen Victoria of England and Czarina Alexandra Feodorovna. The castle’s interior contains precious stained glass windows (dating from 1500), frescoes, a Renaissance fireplace and some fine, historical furniture. The romantic castle garden is a true gem among the gardens of the Middle Rhine.
Rheinstein Castle is a reconstructed hillside castle on the steep slope of the Bingen Forest to the Rhine Valley. It is located about one kilometer south of Trechtingshausen, 90 meters above the Rhine. The medieval castle was built between 1306 and 1320 as a residential tower with an integrated shield wall to secure the Mainz territory, together with the Mainz castles Klopp in Bingen, Ehrenfels in Rüdesheim and Heimburg in Niederheimbach. Rheinstein Castle is the first rebuilt castle of the 19th century. Prince Frederick of Prussia had the ruins of the medieval castle extended from 1825 and furnished to a high standard with stained glass windows, furniture, weapons and spolia. His great interest in the Middle Ages and his enthusiasm for castles and ruins were consistently realized here. Rheinstein marked the beginning of the "romantic reconstruction" of numerous Rhine castles that had previously been destroyed in the Thirty Years' War, the Palatinate War of Succession and by Napoleonic rule. The reconstruction was carried out until 1829 with the participation of Karl Friedrich Schinkel according to the plans of the Koblenz building inspector Claudius von Lassaulx by the architect Wilhelm Kuhn. Today, the romantic castle Burg Rheinstein with gastronomy, apartments and the castle museum is located in the castle complex. The rooms of the castle museum of Rheinstein Castle convey an impression of aristocratic living culture at the time of Prince Frederick of Prussia. He had the castle ruins extended as a summer residence from 1825. Among the special features of the rooms are the wall and ceiling paintings by the Düsseldorf painter Ludwig Poser. He painted almost all the living rooms with illusionistic tracery decorations. The historicizing tiles, doors, fittings and paneling in the rooms testify to good craftsmanship and the prince's enthusiasm for the Middle Ages. Antique furniture from the 17th and 19th centuries, as well as armor and armory from the 15th century are other components of the décor. The museum is open daily from March 15 to November 1 and on Saturdays and Sundays during the winter months. The neo-Gothic chapel of Rheinstein Castle was built in 1839-44 south of the castle, outside the medieval ring wall on a high substructure. Prince Frederick of Prussia arranged for its construction because he wanted to be buried at his favorite place, Rheinstein Castle. The graceful chapel features a filigree gable facade and a rich tympanum, a sculpted archway above the lintel of the entrance. A finial adorns the roof above the gable of the façade, and gargoyles in the shape of dragons are placed on top of the tall, copper-framed ridge turret. In the basement of the chapel there is a crypt with the coffins of the prince, his wife Luise and his son George. An outside staircase leads down the side to a window that offers a view into the crypt. South of Trechtingshausen, a steep footpath leads from the banks of the Rhine to Rheinstein Castle. The path is part of a landscape park that was created along with the romantic reconstruction of Rheinstein Castle in the 19th century. An artificial stream with waterfalls and resting benches accompany the ascent to the castle. It passes a large boulder held together and secured with a chain and steel cables. 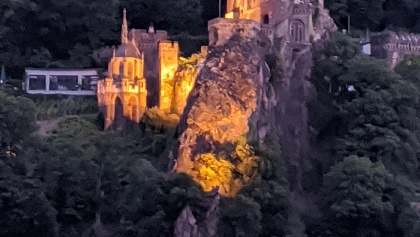 The Rhine Valley, particularly the Upper Middle Rhine UNESCO World Heritage Site, is considered one of the most beautiful landscapes in Europe.