Cycling on the Wied cycle path through beautiful river valleys

Responsible for this content
Westerwald - Ganz nach deiner Natur! Verified partner  Explorers Choice
From the source at the Dreifelder Weiher to the mouth near Neuwied, this tour takes me from east to north and west through beautiful nature and past numerous sights.
moderate
Distance 97.1 km
Duration7:30 h
Ascent278 m
Descent666 m
Highest point472 m
Lowest point56 m
I'm standing at the Rotenhain train station and decide to pay a visit to the nearby Stöffel Park first. The world's first mouse with an age of 25 million years was found in this quarry adventure park. Then I head back and my next destination is the Wied spring in the small village of Linden. I follow the markings to the Dreifelder Weiher, the largest of the seven reservoirs in the Westerwald lake district, and enjoy the wonderful natural landscape of the Wiedaue on the tour. Near Altenkirchen I come across the Bismarck Tower, which is about 100 years old and can be visited on the first Sunday of every month. In Burglahr, the Alvensleben gallery awaits. Ore was mined here until 1930, and today it is open to visitors. A guided tour is recommended. The Handicraft Museum, an old half-timbered house in Waldbreitbach next to an oil mill, also arouses my curiosity. I can visit it on Saturdays and Sundays and take a coffee break in the quaint rooms. The rest of the way takes me directly to Neuwied, where the Wied flows into the Rhine.

In summer, bathing suits are a must, for example for swimming at the Dreifelder Weiher. The beach café in Niederbuchenau (Roßbach) is also particularly beautiful.

Very good condition required. The tour can easily be done in two days.

Neuwied, mouth of the Rhine

The route is about 97 kilometers long. From Rotenhain station, it climbs toward Linden and then gently descends toward the pond. I keep to its northeast side and progress towards Steinebach an der Wied. In gentle bends, the route winds northwest to Ingelbach. Now I ride a large north and west arc to Widderstein, turn sharp right to the west and shortly after reach Michelberg and soon after Altenkirchen. Continuing southwest, the path tends to descend. Between Altenkirchen and Neustadt a small hill waits, other hilltops are also present. Shortly after Niederbreitbach, the route leads about 150 meters strongly uphill and just as steeply downhill. Otherwise, the tour leads me largely through the quiet Wiedtal, although I am also on old railroad tracks and occasionally on roads. Where modern markings are missing, I orient myself by old signposts, which guide me just as reliably.

For bags and backpacks not only the back offers space on a bike tour - the weight of the equipment should be best distributed over several parts of the body and wheel. Driving wind, rain or sun can lead to very different temperature sensations on the bike - a cold can best be avoided with a professional bike clothing. You should always have a suitable change of clothes on hand on a multi-day tour to be prepared for any eventuality. Among other important equipment, the necessary tools and repair utensils should not be forgotten. At high speed, it is easy to take a wrong turn on a bicycle tour: For orientation, traditional and modern aids such as a bike map or a GPS device. You should always have a small emergency kit with you. 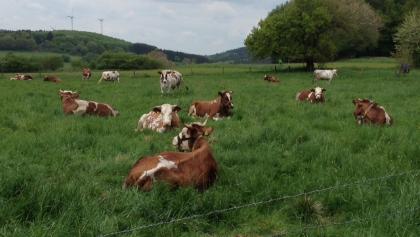