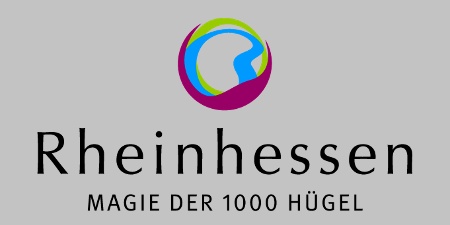 Stage 1
The route begins in Bingen, where the River Nahe flows into the Rhine. At the outset, it heads upriver along the Rhine on the same path as the Rhine Cycle Route. This relatively long section guides you along riverside promenades and past disused harbours, all the time watched over by the towering statue of Germania on the other side of the water. Next are the immense ruins of a railway bridge destroyed in the war, before you come to the Rheinaue, a forested conservation area on the banks of the river. After Gau-Algesheim, you cycle through the heart of an orchard plantation. A combination of riverside paths and the Rhine embankment then steers you to Ingelheim-Nord, where you can cross the river by ferry to Oestrich-Winkel. A little further on at the end of the Selztal Valley Cycle Route, the Hills Route loops round to Ingelheim (an important town during the Frankish period) and continues south through the Selztal valley. The route presses ahead to Ober-Ingelheim and a region where Frankish history is still very much in evidence. This stage entails a total of climb of approx. 40 metres over a length of two kilometres, split into two sections. As the route ventures eastwards on a slightly steeper gradient, a deep valley near Heidesheim forces you to really work those muscles. The climb begins in Sandmühle and ends in Finthen, the first of the Mainz suburbs that lies in your path. As you rise in altitude, the Taunus hills and its villages set just back from the river emerge into view across the silvery Rhine. Mainz city centre is your next destination. It is reached via a series of quiet paths that follow the tiny Gonsenheim river through parks and gardens, away from the busy roads. It has taken until this point, 4km from the end of the stage at Mainz train station, for the landscape to assume an urban character. Despite this, cycle paths still make up the majority of the route.

Stage 2
Starting at Mainz train station, the route advances on urban cycle paths to Bretzenheim. Here, you begin a long ascent through fields and farmland up to a ridge of land, just south of Mainz. An industrial landscape lingers in the distance for a while, before you hit a stretch of open countryside all the way to Ebersheim. Just beyond here is a final small hillside for you to tackle. Once it has been negotiated, you will have completed the first of two 140-metre altitude variations in this stage. Only 2km further along, another chunk of this comes gift-wrapped in the form of a fast downhill section. Now, with two thirds of all the uphills and downhills behind you, a 15km section on level terrain makes for a welcome change. From Harxheim to Köngernheim, you accompany cyclists on the Amiche Route along an easy-to-manage stretch of disused railway track. The Selztal Valley Cycle Route then joins in the fun for 3km between Hahnheim and Köngernheim, before the Hills Route sets off on its own towards Undenheim. After 2km through the western outskirts of the town famed for its beautiful houses, it's a further 4km to Gabsheim across wide expanses of level countryside in the peaceful Goldbach valley. This is where the second major altitude variation begins (90 metres over 5km), which leads you up into the foothills of Wörrstadt. Once at the top, the view to the east in the direction you came from extends as far as the Rhineland Plain and the densely wooded crest of the Odenwald forest. In a final flourish before the stage draws to a close, you head down another valley to Wörrstadt itself. Here, you cycle through the narrow little lanes in its picture-postcard old quarter towards the train station on the northern edge of town.

Stage 3
Leaving Wörrstadt in a westerly direction, you cycle downhill towards Sulzheim, before tackling a short climb and two bends. Immediately afterwards is a brief but steep ascent over a vineyard hill to Rommersheim. Another hill follows before you reach your next destination, Wallertheim in the Wiesbachtal valley. From here, you climb 50 metres over a distance of two kilometres up to the plateau on Schwarzberg hill, where your efforts are rewarded with a sensational 360-degree view. Clearly visible to the west beyond the verdant slopes of Rheinhessen Switzerland is the huge, flattened out shape of Donnersberg hill. A brisk downhill then drops you into Gumbsheim, followed by a short cycle to the outskirts of Wöllstein in the Appelbach valley. Here, the route swings back towards the south-east on its way to Eckelsheim. It continues along the tiny Dunzelbach river to Stein-Bockenheim, before venturing into Wonsheim with its beautifully preserved architecture. The next big challenge to stand in your way is one of the impressive hills that give the route its name, where a whole 50 metres have to be climbed across a distance of less than one kilometre. Luckily, there is a large, open shelter at the halfway point where you can take a breather. The route then twists and turns on a rapid descent into the Wiesbach river valley to Wendelsheim, where an old town hall is a pretty sight in the centre of the village. Flonheim, the next stop along the route, is also on the Wiesbach river. To avoid the more direct main road, your path takes you over the hills. Compensation for the detour comes in the form of spectacular views: not only can you see far into the valley, but the panorama extends to the quarries that have produced sandstone for numerous prestigious buildings down the years. The steepest climb in this stage comes after Flonheim. Divided into two sections, it rises some 180 metres over a distance of three kilometres, including a gradient of almost 10 per cent over one kilometre from Flonheim to the log cabin restaurant on Donnersberg hill. The final part of the stage entails another set of vineyard paths that whisk you downhill to the narrow, town-centre lanes in historical Alzey.

Stage 4
Joined by cyclists on the Selztal Route, you depart Alzey in a short climb (40 metres over 1.4km) and a loop, followed by another speedy descent back into the Selztal valley. Shortly afterwards, in Framersheim, you pedal south on the same path as the lower reaches of the Mills Cycle Route, leaving the Selztal valley and its cycle route behind. The route then rises quite noticeably to Gau-Heppenheim, traverses a hill (60 metres over 2.4km) and drops back down to Dautenheim. After almost one kilometre, it switches to a farm track and heads over another hill (45 metres over 1.8km) to Eppelsheim. From here, you cycle on a quiet asphalt path over an autobahn overpass, where the Hills Route and the Mills Route go their separate ways. It's then full steam ahead through the southernmost wine region in Rheinhessen, where Gundersheim is your first destination. Bermersheim is just beyond a hill, before you cycle along another continuous stretch of vineyard tracks to Flörsheim-Dalsheim. Past the final ridge before the Zellertal valley, the route once again heads uphill (30 metre climb over 800 metres). Monsheim, the first of your stops in the Zellertal valley, is quickly reached via a speedy descent. The village is also where the Zellertal Valley Cycle Route becomes the latest to join your path. The two routes then follow the same level cycle path all the way to Worms. Initially to Pfeddersheim with its town wall ruins and many surviving towers, then along the tiny River Pfrimm to the first glimpses of green in the Pfiffligheim suburb. On the subsequent 2.5km to the centre of Worms, you follow the twists and turns of the Pfrimm, cycling along its broad riverbanks under the shade of towering trees. Benches and playgrounds beckon from the wayside and give the impression of an elongated park. There are now just 3km of cycle paths through the centre of Worms before you arrive at the Nibelung Bridge – your final destination and a rendezvous with the Rhine Cycle Route.

Standardised, end-to-end signposting with destination and distance markers is being introduced in line with current Rhineland-Palatinate guidelines.

The Hills Route is ideal for a tour of discovery by bike through the heart of the Rheinhessen region, with connections to the following routes: