The most spectacular and difficult stage with its fantastic views, the unspoilt climbs and adventurous ascents. We wish you a lot of pleasure!
open
difficult
17.1 km
7:20 h
682 m
741 m
"Rocks, castles, water and wine" - the stage leads through one of the most beautiful areas of the middle Ahr Valley and offers breathtaking views of the winegrowing Ahr valley and far beyond the Ahrhöhen. For the most part you walk on natural paths, stretch-wise, the way climbing character and therefore requires the walker sure-footedness and good condition. With a view of the Kreuzberg Castle, the path initially leads uphill on a narrow path. Surefootedness is required on the section through the spectacular rock landscape around the Teufelsloch near Altenahr. A varied ascent leads to Krähhardt and Teufelslei. Between forest and vine the way leads past the Saffenburg ruin to Rech. The detour to the ruin Saffenburg is rewarded with a magnificent 360 ° panoramic view around Mayschoß. Along the Ahr the path leads to Dernau. Steep uphill over a ravine, later on a rocky path, the landmark of Dernau, the Krausberg is reached. From Krausbergturm offers a magnificent panoramic view far beyond the Ahrhöhen out. Through mixed forest, downhill on a serpentine path, past the ledge "Bunte Kuh", the stage destination Walporzheim is reached.

Sure-footedness and head for heights are required at several passages

Overlooking Kreuzberg Castle, cross the Bahnhofstraße and Ahrbrücke after 500 m, immediately after the railroad crossing, turn right onto a narrow forest path up to the Lingenberg. Through abandoned, former vineyards, the path leads to a small way chapel - with a view of the left Ahrhöhen and the starting point at the station Kreuzberg - here then continue in the left bend below the Horn down to the outskirts of Altenburg. On the top left you can already see the next destination, the rocky ridge with the Devil's Hole, and after a short climb you reach the crossroads above the Jugendgästehaus Altenahr. Here you continue on the left narrow path, first in several loops upwards, then along a rock ledge on the ridge along and leads - always accompanied by beautiful views of Altenburg and Kreuzberg and the already traversed area - after 400 m to easily overlooked branch to devil's hole. Here it continues on the left narrow path, first in several loops upwards, then along a rock ledge on the ridge along. Wonderful views of Altenburg and Kreuzberg and the area that has already traveled through accompany the way. After 400 m you will come to the easily overlooked branch. The detour to the Devil's Hole leads to the right of the path, first over irregular steps with a short climb over a rocky path through the rock hole. From Teufelsloch offers a breathtaking view of Altenahr, Castle Are, the Ahrschleife with the Langfigtal, the opposite Engelsley, and in the distance behind the Krausbergturm.Zurück on the AhrSteig the path leads over the rocky ridge to the lookout point Black Cross, further down to the Ahr past the towering rocks of the Engelsley and through the road tunnel on the right Ahrseite. Here begins the varied ascent up to the Krähhardt and Teufelslei, initially through earlier terraces of wine, then soon in serpentines to the clear plateau above the Ahrschleife. Left through the saddle between Teufelslei and Schrock you walk on the narrow but promising Marienruhweg on the steep slope of the Schrocks on, now overlooking Mayschoss and between forest and vineyards past the Saffenburg ruin to Rech. The detour to the ruin Saffenburg worthwhile. Here you have a wonderful panoramic view of Mayschoss, the course of the river Ahr and the surrounding villages. Shortly before the first houses of Rech the path turns left, through vineyards it goes down to the Ahr and over the Nepomukbrücke on the left Ahrseite to Dernau to Steinbergsmühle. Over the bridge to the right Ahrseite you walk past the Jodokuskapelle over a longer section steeply up to the crossroads, which leads left towards Krausberg. In the left-hand bend, turn off to the right-ascending sunken path and after a short distance change to the left-hand branching trail, which climbs through rocks - past a vantage point - to the Krausberg, the highest point of the hike at 395 m. From the tower offers a terrific you can enjoy a beautiful 360 ° panoramic view, with good views to Cologne Cathedral. The remaining 4 km long section leads through mixed forest to the Alfred Dahm tower; From this 1929 built in honor of the founder of the Eifelverein Ahrweiler tower overlooking the right bank of the Rhine Siebengebirge. The path now continues northwards towards Felssporn above Walporzheim and via 19 hairpin bends the path quickly descends to the Ahrtalweg. After a short distance, the trail continues below Katzenley along the right bank of the Ahr. The stage ends at the Wanderparkplatz at the Josefbrücke in Walporzheim. 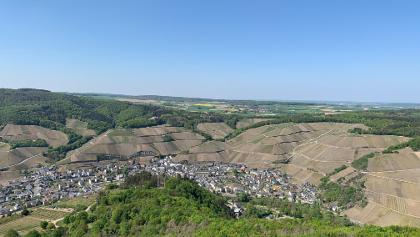 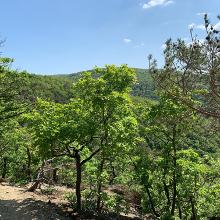 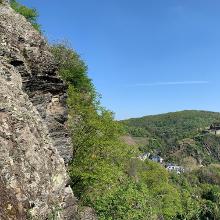 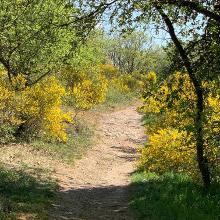