The last stage of the RheinBurgenWeg is characterized by extensive forests and gurgling streams. After some challenging ascents you will be rewarded with a view of the Drachenfels and the Siebengebirge.

You get to the RheinBurgenWeg at the underpass under the B9 in Remagen, which takes you immediately to a marvellous cultural highlight: the lovely Apollinaris Church!

From the church, climb to the lookout at the statue of St. Francis and continue steeply uphill into the woods. Once you've reached the top of the climb, you'll come to an idyllic small forest lake where you can quickly regain your breath.

There now follows a delightful and varied section through woodland with the path frequently changing direction. The trail gradually descends and finally reaches the Taubenbach Valley. You don't stay in the valley for long as the trail quickly climbs uphill along grassy paths through groves of trees. Soon you'll find yourself in woodland once again, heading uphill. Once you've reached the ridge, the RheinBurgenWeg follows a quaint narrow pass to take you out again into open countryside where a knoll affords a great view of Unkelbach.

The RheinBurgenWeg leads straight through the town, crosses the stream and then follows its course towards the Rhine Valley. You'll come to Bandorf after climbing up a steep hilltop. Passing alongside gardens, the RheinBurgenWeg winds through the valley before an enormously steep climb up to Oberwinter.

Quickly the trail leaves habitation behind again and, at the edge of the village, heads into the silent Bandorf Valley. From there, after passing the sports ground, the path climbs alongside thick hedges to the plateau, where you'll be rewarded by a magnificent view. Finally you'll come to a stretch of woodland punctuated by holly bushes. After a few bends, you'll reach a shelter and descend into the Kasselbach Valley. Follow the fence around the wildlife park to the fork towards Rolandseck railway station.

Past the artistic building of the ARP Museum, the trail continues on into the forest and reaches the Rolandswerth stream. The last ascent to the plateau starts here.

High up you have excellent views over the open fields before the trail heads downhill through a grove of trees. Steps take you to your final well-earned destination: the Roland Arch!

After soaking in the view and enjoying a well-earned rest, follow the path down to the B9. Follow the path along the River Rhine to the car park in Rolandseck, where your RheinBurgenWeg adventure comes to an end.

There is a train station in both Remagen and Rolandseck (www.die-bahn.de).

Follow the B9 along the Rhine to reach Remagen and Rolandseck. In Remagen there is a car ferry to Erpel, and in Rolandseck you can cross the river to Bad Honnef. 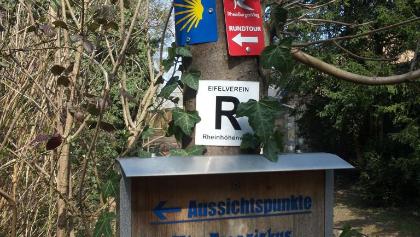 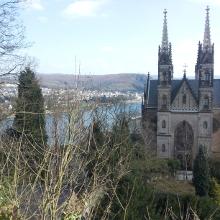 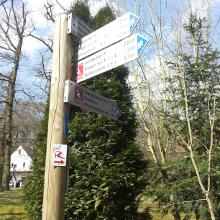 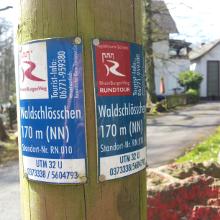