Mighty towers and gorgeous views on the 'King's Stage': no fewer than four medieval ruins line this stage of the trail to Bacharach. Enchanting paths lead you through varied landscapes and to encounters with legends.

Four in a row!

A long rocky path leads from Trechtingshausen uphill over the Palmkopf to the main trail on the Kölsche Wiese. However, the slightly longer section through the Morgenbach Valley up to the Gerhardshof and on to the Kölsche Wiese is much prettier. The RheinBurgenWeg now leads gently downhill to the lookout tower at the "Seven Castles" viewpoint, from where you can spy the 7 ancient ruins on the right and left of the River Rhine! Finally follow the "Martinspfad" downhill from the steep ridge, where you will be inspired by the breathtaking views. Back on wide paths, you'll soon be attracted by the fork that leads to Sooneck Castle nearby as it is considered to be a castle veritably built by robber barons.

After a flying visit to the Middle Ages, the RheinBurgenWeg continues down towards the valley through extensive vineyards. Once again, the trail makes a loop into the Erschbach Valley and then continues on to Niederheimbach. Passing through the fairy grove, walk along the ancient pavements to the town centre, passing Hohneck Castle which is not open to the public.

You quickly leave the town behind with varied hedges lining the path along the edge of the slope and, now and then, you will catch a glimpse of the River Rhine. As the road bends into the Gaisbach Valley, you'll be treated to a superlative view of the ruins of Fürstenberg. Next cross the Oberdiebach stream. The trail then climbs through vineyards and you'll have an opportunity to pay a visit to the Fürstenberg ruins.

After a section through dense hedges, you'll finally find yourself standing directly in front of the old ramparts of Bacharach. Immediately above this, your gaze will be drawn to the imposing Stahleck Castle before you descend into the picturesque historic centre of Bacharach to find food and accommodation.

There is a train station in both Trechtingshausen and Bacharach (www.die-bahn.de). 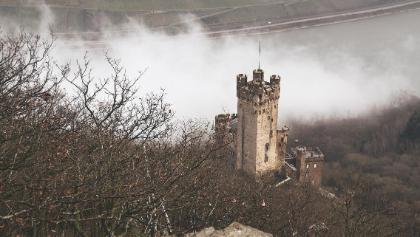 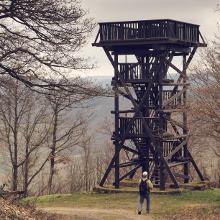 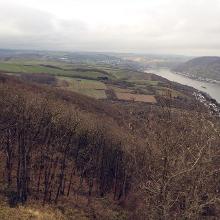 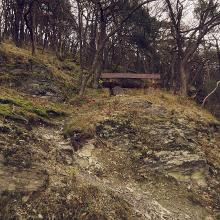