moderate
21.3 km
7:00 h
462 m
589 m
Legend has it that a dragon would lie in wait in his cave for passing ships and breathe fire on them. One day his fire hit a ship that was loaded with powder. The huge explosion that followed meant that the nasty dragon did just exist in legend. According to the Nibelungen legend, it was Siegfried who killed the dragon. When you listen to these stories, it's hard not to imagine the hot breath of the fire-breathing dragon on the back of your neck.
Premium route awarded the "Deutsches Wandersiegel"
Difficulty
moderate
Technique
Stamina
Experience
Landscape
Highest point
Petersberg, 322 m
Lowest point
Bonn, 47 m
Best time of year
Jan
Feb
Mar
Apr
May
Jun
Jul
Aug
Sep
Oct
Nov
Dec

Wear suitable weatherproof clothing that will protect you from cold, wet, heat and sunshine.
Make sure you take regular breaks and don't overexert yourself.
Take enough fluids with you as there are sections without rest stops.
Wear suitable hiking boots/shoes which give you enough grip on slippery, steep, rocky and uneven surfaces.
Avoid any sections of the route which you feel are too difficult for you. Natural trails can quickly become wet and slippery in adverse weather conditions.
Particularly in autumn, you should be careful of uneven ground, roots, stones or holes that have been covered by leaves.
You need to take these kinds of adverse conditions into account every time you go on a hike.
Particularly steep and dangerous places are made safer with handrails or ropes. Please use these as safety aids. Handrails are not to be climbed on or used to get a better view!

Starting at Königswinter train station, the first stop on this stage is Drachenburg Castle. The elegant villa, built in the historicist style and often hailed as the Versailles on the Rhine, is located halfway to the Drachenfels and currently open, despite ongoing renovations. The Rheinsteig trail is found at the entrance to the villa. In the nearby Nachtigallen Valley signs show the way to the Milchhäuschen restaurant. The trail then ascends in a large loop around the Schallenberg and continues uphill to the viewing pavilion on the Geisberg. After resting here, descend to the Walter Guilleaume hikers' hut and on into the Mirbesbach Valley, where you cross the road between Königswinter and the Margarethenhöhe (Siebengebirge Association Info Centre). The steep ascent to the Petersberg, one of the seven highest peaks in the region, begins close to the centre. German post-war history was made here: in 1949, the ‘Petersberg Agreement’ was signed in the hotel which later served for several decades as a guesthouse for the Federal Republic of Germany. This agreement was the first step towards the sovereignty of the Federal Republic.

From here, the trail descends to Fritz-Rösing square and on to Heisterbach Abbey, a former Cistercian monastery. The large monastery park, with its imposing ruins of a church, is popular with the residents of nearby Bonn. Leave the park and continue to Mühlen Valley. The trail climbs up through the vineyards to the Rheinblick viewing point. From here, it turns away from the Rhine Valley again and continues to the outskirts of Oberkassel. From Oberkassel, the trail ascends to the Kuckstein, a plateau above the site of former basalt quarries. The path, which follows along the edge of the plateau, constantly surprises you with magnificent views. The views at the Blauer See lake and the Dornheckensee lake are particularly spectacular. The quarries are completely filled with water and have become an important spawning site for various species of amphibians. Although swimming in the quarries is forbidden, some people cannot seem to help themselves and some don't make it out alive.

Leave the Dornheckensee hikers' car park, cross Oberkasseler Straße and head for the nearby motorway. Just before you reach it, the final ascent begins: up to the Foveaux pavilion. From this rest spot, take the bridge over the motorway and continue to the church of Küdinghoven. The ‘Post Tower’ on the banks of the Rhine guide you to the T-Mobile premises in Ramersdorf, and on to the Rheinaue public park. The trail then follows the river downstream to the Kennedy bridge, crosses the Rhine (for the first time) and ends at the market square in Bonn, where you certainly deserve to have a rest.

B42 to Königswinter train station 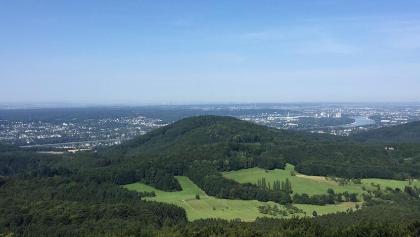