Responsible for this content
Romantischer Rhein Tourismus GmbH Verified partner  Explorers Choice
With its mixture of woodland, meadows, vineyards, fields and little villages, this section of the Rheinsteig is rich in variety. There are a number of short but steep ascents.
open
moderate
13.2 km
4:30 h
508 m
474 m

Be sure to allow enough time to wander through the old town of Linz before you start your hike. Lots of brightly coloured, half-timbered houses, Linz Castle, the historic town hall (one of the oldest in Rhineland-Palatinate) and the old church of St. Martin are all a sight to behold.  The ancient church (open in the afternoons during the tourist season) is being successively restored by an extremely committed club of friends of the church. One of its treasures are its wall paintings which date back to the 13th century.

Today’s tour ends in Bad Hönningen. The spa and wine town is proud of its sunny vineyards and the healing powers of its thermal springs. The spa town of Bad Breisig lies on the left bank of the Rhine.

The Church of the Holy Guardian Angels in Dattenberg is worth visiting.

From the market square in Linz you walk up on the left of the historic town hall to St. Martin’s Church. The churchyard, now the Tilmann Joel Park, has gravestones dating from no fewer than five centuries. The climb up to the Kaiserberg, 174 metres above sea level, can now begin in earnest. This is home to the Kaiserberg Stadium; from the summit cross there are grand views out over the Rhine Valley, mouth of the River Ahr and Erpeler Ley.

The path now zigzags down into the valley and up again on the other side to the sports field in Dattenberg which you now partly circle. In the adjacent copse a woodland bench invites you to relax for a moment and admire the panoramas of the Rhine and Erpeler Ley. Once you’ve crossed the village, a steep field track takes you downhill. A few metres above the Rhine you then follow a narrow path upstream along the slope parallel to the Rhine, which you catch frequent glimpses of, until you reach the edge of Leubsdorf. After a short ascent a shady path takes you on the level round the Giersberg and on into Leubsdorf, a romantic wine village with its white church on the Rhine.

You then continue towards Ariendorf. The climb up to the village starts at the Alter Mühle or old mill. Short but steep, your ascent ends on an open plateau of pastures and meadows with wide, sweeping views of the surrounding countryside. Before the path down to Ariendorf, a suburb of Bad Hönningen, there’s a pretty picnic area with a woodland bench. A sign points out the landmarks you can see from here.

The old chapel on the new marketplace in Ariendorf was erected in 1712. The avenue of aged chestnut trees you pass through en route to Arenfels Castle is particularly scenic. With its 365 windows, 52 doors and twelve towers, Arenfels is also known as “castle of the year”. Various rooms can be hired for events. A little further on you come to the edge of Bad Hönningen through the vineyards. After about another kilometre the access path heads off towards the train station.

If you have enough time, you can take a seat at one of the town’s many cafés and restaurants or even soak your tired limbs at the thermal baths.

Linz and Bad Hönningen are both on the regional stopping and regional express train network which operates a regular service. Following the access path with its yellow signs you come to the market square in Linz where you pick up the main Rheinsteig trail.

There is a car ferry in Linz and Bad Hönningen.

Follow the B42 along the Rhine to get to Linz and Bad Hönningen.

Access by train or ship (in the summer) possible.

There are various free parking spaces at the station.

Alternative parking can be found:

- Underneath the railway viaducts (Am Gestade; the south end is free). 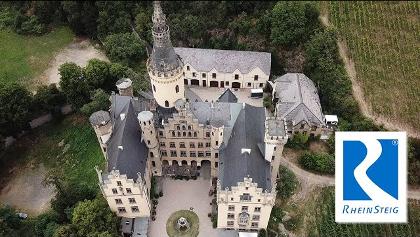 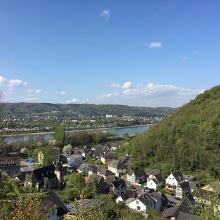 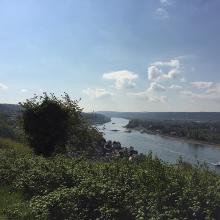 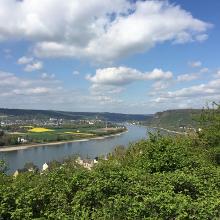