Responsible for this content
Mosellandtouristik GmbH Verified partner  Explorers Choice
This tour starts and ends in the historical town centre of Sankt Aldegund, in the holiday region of the Zeller Land. Romantic alleyways and half-timbered houses, the “Alte Kirche” (Old Church), a masterpiece of the omanesque period, as well as winemaker houses with original openhall kitchens and wine cellars invite guests to stay and enjoy. From the town centre, the trail takes you to the Raulwing-Platz, a forest relaxation location high above the town with fascinating views of the Moselle Valley. The impressive terraced landscape with dry walls and geologically interesting geological rock formations are further highlights of this tour, as well as the largest population of wild growing box trees at the Moselle.
moderate
8.7 km
3:30 h
365 m
330 m

Small chapel as final resting place of a great art collector: The tomb of Peter Ludwig in the mountain chapel of St. Aldegund

The Premium Trail Felsen.Fässer.Fachwerk takes the hiker to an ancient Celtic place of worship above St. Aldegund. Here, in 1144, a small Christian place of worship was built in honour of the Merovingian saint Aldegundis. Today, referred to as the Old Church, the chapel is located in the midst of a garden which used to be a cemetery. Some old grave crosses still remind of this time. In 1872 a new parish church was built at the banks of the Moselle, and the condition of the small mountain chapel was so bad at the time, that the diocese authority called for the municipality to demolish the nave. Luckily, there were no funds available for this, and part of the inventory was sold and the roof received a makeshift repair. In 1948, the local Marienverein took care of the small old little church, repaired the roof, put in new windows and started to search for the sold inventory. They managed to purchase the wrought-iron pulpit from 1663 via the Cologne art trade. The sandstone grave altar of the master Hans-Ruprecht Hoffmann from 1602 for the electoral bailiff Nicolaus Rultz was discovered at the Aachen collector couple Peter and Irene Ludwig. First they did not want to sell the piece of art, but then they visited the mountain chapel and decided to not only donate the grave altar but also to support the restoration work financially. In return, they wanted a burial place connected to the church. So it happened, that Peter Ludwig was laid to rest in St. Aldegund on 30 July 1996 and Irene Ludwig on 4 December 2010.

Together with his wife, Peter Ludwig had collected thousands of valuable art pieces. Since 1957, the wealthy couple collected for the public, and donations and long-term loans are on display in over twenty museums. The "Ludwig Museums" and institutes that bear the name Ludwig, are based on the couple's initiatives or through donated pieces of art the couple had a decisive impact on them, for example in Cologne, Oberhausen, Koblenz, Saarlouis, Bamberg, Basel, Budapest, Vienna, St. Petersburg and Beijing.

Completely in contrast to these great monuments, which Peter and Irene Ludwig set during their lifetime, the burial place in the small funerary chapel makes due without any donor pathos. The sculptor Christof Anders from Senheim was commissioned to create a simple, basic tomb, behind which the artist's personality also largely recedes. The tomb is visible from the outside, but if you want to visit the church from the inside, you need to get the key (from family von Essen, Auf der Teusch 4).

The wine village Sankt Aldegund in the holiday region of the Zeller Land is located where the Moselle Valley runs straight from the south to the north, with a glorious panoramic view of the former monastery Marienburg in the south, and the towering Calmont in the north. From the historic town centre the Premium Trail Felsen.Fässer.Fachwerk takes you to a cliff above the barrage and lock of St. Aldegund. Here, at the Kehr-Heiligenhäuschen rest place you can enjoy a sweeping view of the Moselle landscape and the heights of the Hunsrück. Take a short rest and watch the lock process of the Moselle shipping and the railway traffic. The path takes you past the Goldkaul cave, where copper ore extraction was attempted in the 19th century. The Calmont view offers you an impressive view of the steepest vineyard in Europe, which you reach via an access route of about 300 m in the direction Bremm. Back on the main path, past the Josefshöhe, you hike above the top vineyard Sankt Aldegunder Palmberg terraces at an extreme steep slope through one of the largest wild-growing boxwood fields at the Moselle. You need sturdy shoes for hiking on the Palmberg Trail which runs along the steep slope. In the valley, at the end of the Palmberg-Pfad, you can directly hike to the Raulwing-Platz viewing point or turn off into the 4 km long additional loop – it takes you through nature, forests and fields, also to the Raulwing-Platz. From here, a spectacular view opens up of the landscape, the Sankt Aldegund wine village with its many half-timbered houses and the neighbouring Moselle village of Bremm, Bullay, Alf and Need. From the Raulwing-Platz the path continues back to the Moselle Valley and offers up a another highlight of the tour, the Roman Old Church from 1144.

A 48 exit Wittlich-Mitte, via B 49 direction Alf on to Sankt Aldegund

A 48 departure Kaisersesch, L 98 to Cochem, continue on B 49 along the Moselle to Sankt Aldegund

A 61 departure Emmelshausen, on B 327 direction Kastellaun, continue to exit Blümlingshof on B 421 to Zell (Moselle), on the B 53 along the Moselle to Sankt Aldegund

There is parking at the banks of the Moselle and close to the bus stop in the Am Moselstausee road. 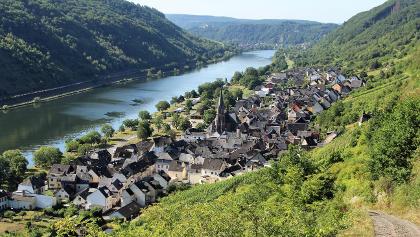 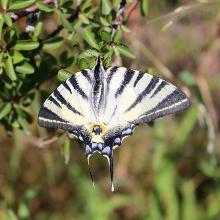 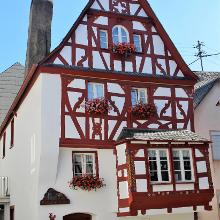 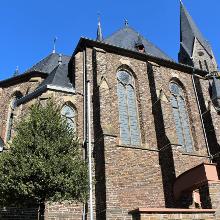