Responsible for this content
Romantischer Rhein Tourismus GmbH Verified partner  Explorers Choice
It is a land excursion over the Rhine heights, during which the beauty of the landscape is discovered. The alternation between forest, meadow and field landscapes make the "Breisiger Ländchen" an entertaining day trip.
moderate
16.8 km
5:00 h
540 m
540 m
On the hike of our premium round trip you can enjoy great views of Arenfels Castle, the ruins of Olbrück Castle, Rheineck Castle and, in good weather, even a view to the north, to the Siebengebirge with the Drachenfels or to the south to Hammerstein Castle. Beautiful orchard meadows, varied valleys and plateaus are reached and crossed. In addition to the rich choice of refreshment stops within Bad Breisig, the hiking trail offers other great places to stop, for example at the Mönchsheide estate, the Mönchsheide airfield or the Schäferhütte.

The carrying of larger dogs/baby carriages is limited due to a very narrow gate.

The implementation of this path was supported by the development program PAUL with the participation of the European Union and the state of Rhineland-Palatinate, represented by the Ministry of Environment, Agriculture, Food, Viticulture and Forests.

At first, you go behind the Römer-Thermen in the direction of the train station. At the parking place of the tennis court Römer-Thermen you go into the forest. After a short time you will reach the Fichtelhütte. There is a great view of the "Goldene Meile". A flat landscape between Bad Breisig and Remagen. It got its name from the fertile soil. In the background you can see the Siebengebirge with the Drachenfels in good weather. In the foreground Arenfels Castle attracts the attention of hikers. The medieval castle was rebuilt in the 19th century by Zwirner, a master builder of the cathedral, to a neo-gothic castle.

Now it goes uphill, the Friedwald is crossed. Good observers might notice the small number plates on the trees. The plateau of the Lieshöhe is now in front of the hikers. The area was covered by loess during the ice ages, from which a fertile soil developed.

Although a height of about 200 meters has now been reached, numerous rounded stones testify to the activity of the Rhine, which once flowed at this height. The plateau is crossed and it passes numerous orchard meadows.

On the other side the road goes downhill towards Gönnersdorf. During the descent, the medieval ruins of Olbrück Castle can be seen on the horizon.

Now we continue through meadows and pastures to Waldorf. The valley was cut into the landscape by the Vinxtbach. In former times the brook was an important border between Germania Superior and Inferior at the Romans and later between the archbishopric of Cologne and Trier. Due to the barrier even the language in the two areas had developed a little differently.

About 1km from Waldorf the path now turns off towards Wallers. Waldorf is a village with many beautiful half-timbered houses.

The route now leads through forests and fields through the characteristic landscape of the Breisiger Ländchen. Soon it goes through a small revolving gate (a very narrow, passage e.g. for larger dogs / baby carriages not possible) into a small wildlife enclosure where deer can be observed if you keep quiet. It goes downhill. After crossing the road, the hiking trail runs through the Heiligental valley to the Mönchsheide, which got its name from the cultivation of monks from the monastery Marienstatt in the Westerwald.

At the small airport you can see many gliders on the weekends, which are pulled up by a cable winch. The manor offers itself as a place to stop for refreshments. Now the last kilometers are about to begin. Shortly before the descent, a Celtic settlement is walked through. There are once again great views of the Rhine valley, castle Arenfels, castle Rheineck and in the south is also castle Hammerstein visible. Shortly Bad Breisig will be reached.

ATTENTION: Due to the obligation to maintain safety on the road, a small section of the trail is currently being rerouted. Following change of the route:

After you have crossed the Friedwald or Rheinruhe uphill, turn right on the gravel road. You do not enter the forest, but follow the wide path to the field, from there you can follow the original route again. The appropriate signs for the detour are available in the area.

By train you can reach Bad Breisig station every half hour from both directions.

From there an access road leads directly to Breisiger Ländchen (300m).

There are also several bus lines that you can take in the city (line 800) and reach many places in the surroundings.

Behind the "Römer-Thermen" , at the train station or in the "Kurpark" in Bad Breisig. 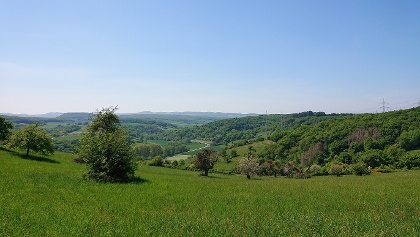 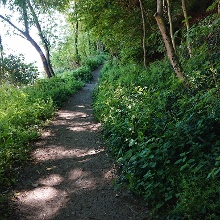 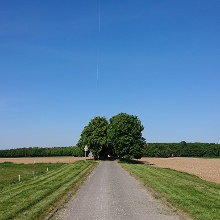 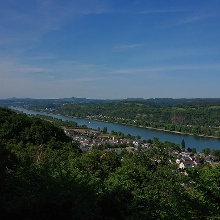