· 107 reviews · Hiking Trail · Dahner Felsenland
Responsible for this content
Dahner Felsenland Verified partner
Breathtaking views, winding paths and bizarre rock formations are characteristic of the premium hiking trails. Particularly attractive is the circular hiking trail "Dahn Rock Trail", with its 15 spectacular stations to the most beautiful trails.
moderate
Distance 12.5 km
Duration5:00 h
Ascent402 m
Descent402 m
The 12-kilometre long Dahner Felsenpfad runs to a large extent along newly laid out narrow paths and opens up to attractive rock formations. Impressive is not only the richly diversified routing, but also the shapes of an incredible variety of bizarre rock formations. For those of you choosing this route, make sure that all of you are reasonably sure-footed and have a certain level of fitness. The Dahn Felsenpfad path is a premium hiking trail and well-signposted along its entire length with the marking "Black Rock on an orange background."

This is a premium trail, belonging to the Felsenland tours of the Dahner Felsenland, the   premium hiking region.

There are eleven premium trails, listed both in the Palatinate hiking menu, as well as the Wanderarena Pfälzerwald Nordvogesen. Furthermore, the Dahner Felsenland is a member of the Premium Wanderwelten.

Refreshment stops along the route: Dahner Pfälzerwald-Hütte in Schneidersfeld, the FelsenGraf-Hütte at the start of the trail, the restaurant Büttelwoog on the camping site in Dahn, the Sportpark at the trail parking lot and also local gastronomy.

Breathtaking clear views, a labyrinth of winding trails and bizarre rock formations are characteristic of the Premiumwanderwege of the Wanderarena Pfälzerwald-Nordvogesen. Particularly appealing is the circular trail "Dahn Felsenpfad" which is considered to be one of the most attractive trails with   spectacular 15 viewpoints.

Right at the beginning of this eventful tour, it becomes clear why the Felsenpfad attracts hikers from all over the place: forests flooded in sunlight, soft-soiled trails and an almost Mediterranean atmosphere radiates a feeling of well-being. On the observation deck of the Pfaffenfelsen you will get a foretaste of the outlooks and views to follow.

At the foot of the Schillerfelsen there is a memorial plaque commemorating the 100th anniversary of the   death of this German poet, philosopher, historian, and playwright . . The steep climb up is rewarded at the top of the rock with a wonderful view of the Wasgaustadt Dahn. Now it becomes more adventurous down the rocks to the Schwalbenfelsen Arena. The trail leads through a narrow rock passage and a staircase to the viewing platform of the Schwalbenfelsen. Here is a the perfect place for a first refreshment. Depending on how the sun is situated, you can watch fascinating sunlight games along the Felsen-Arena. There are almost always hikers on the way, scrambling around the rocks, touching them with respect   and photographing the different rock layers.

Mediterranean vegetation and a great view of the surrounding highlands is offered by   the Elwetritschefels, which can be reached along a soft forest path. If now your stomach starts to grumble you can respond by visiting the forest tavern of the PWV before continuing along the next 8 kilometres.   There is also an interesting short info-path "Naturschutzgebiet Moosbachtal" in front of the tavern which enlightens you about the local fauna and flora.

Following the trail marker "black rock on an orange background", you will soon find yourself in idyllic lush meadows again before the climb up to the next highlight. From now on, the rock attractions line up one after the other and one lookout point follows the next - each with its own unique atmosphere. A sombre, almost mystical aura prevails over the   Mooskopf and Roßkegelfelsen, which can be reached after the Schlangenfelsen. A narrow path winds its way around them and then climbs up to the rocky ridge. The silence up there underlines   the mysterious atmosphere that emanates from this formation of rocks.

After a brief cooling down at the Rothsteigbrunnen fountain, the trail leads leads through a rocky crevice to the Ungeheurfelsen and in a demanding climb up to the mighty rock barrier of Büttelfelsen. A steel ladder leads up to a raised vantage point. From there you can enjoy a clear view of the Lämmerfelsen, which, with its impressive panorama is the next station past the highlights of the Dahner Felsenpfads.

Now just a small walk through the romantic Wieslautertal before we make the last climb up to the Wachtfelsen. A steel staircase leads up to a stone plateau, which offers a final round of views over the Dahn Felsenland from a prominent location. Even the rock formation Braut & Bräutigram (bride & groom) can be seen before admiring them in full size at the parking lot below. All the bizarre rock formations and the varied trail route give the Dahn Felsenpfad” an almost   sensual identity   and rightly justifies it being rate as a "Premiumweg".

Take the train to Bad Bergzabern or Hinterweidenthal, from there by bus to Dahn. From the town centre, you walk to the youth hostel / camping site. From May to October there are excursion trains "Bundenthaler” and" Felsenland Express "" on Wednesdays, Saturdays, Sundays and public holidays from Mannheim / Karlsruhe to Dahn main railway station, Dahn Süd or Moosbachtal in the Dahner Felsenland. Info :   www.der-takt.de

B10 to the exit Hinterweidenthal, continue on the B427 to Dahn, there follow the signage "Felsland Badeparadies" 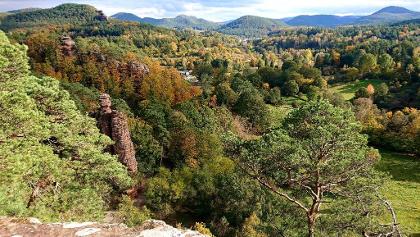 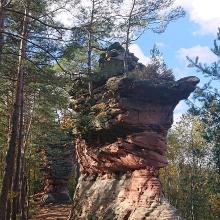 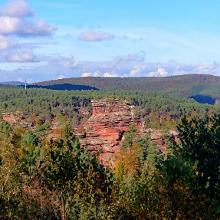 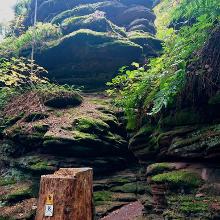