The dream loop with magnificent views over the UNESCO World Heritage Upper Middle Rhine Valley. With many changing views of the Rhine and the Loreley Rock as well as the panoramic view from the lookout tower on the Spitzen Stein.
difficult
Distance 14.6 km
Duration4:30 h
Ascent434 m
Descent434 m
Right at the beginning, you can get an overview from the lookout tower on the Spitzen Stein and count the castles you approach along the way. Later, on the Klüppelberg, you can enjoy a magnificent view of Oberwesel with Schönburg Castle and Kaub with Gutenfels Castle. Immediately in front, in the middle of the Rhine, is Pfalzgrafenstein Castle. There is a second three-castle view on the Wackenberg above St. Goar: Rheinfels Castle on the left, Katz and Maus Castles opposite. In addition, there are always new views of the UNESCO World Heritage Upper Middle Rhine Valley - the venue of the 2029 Federal Garden Show. And of course you can admire the legendary Loreley Rock with its newly designed plateau and open-air stage or the Rhine bends from many perspectives along the way.

There are four places to stop for refreshments along the route, and there are other places to eat in the valley in St. Goar, St.Goar-An der Loreley and Oberwesel.

Detours from the route lead down to the Rhine to St. Goar or Oberwesel

Here you will find all the dream loops

From the lookout tower on the "Spitzen Stein" above Urbar, newly built in 2020, the hiker can get an idea right at the beginning of what is in store for him during the next 14.6 km. Passing the Generation Park of the municipality of Niederburg and later the Niederburg heath landscape, a grandiose panoramic view suddenly opens up upstream of the Rhine. The view from Klüppelberg, the southernmost trailhead, focuses on Oberwesel with Schönburg Castle and Kaub with Gutenfels Castle and directly in front of it - in the middle of the Rhine - Pfalzgrafenstein Castle.

From now on, the trail partly follows the Rheinburgenweg downstream, past the Günderodehaus and Maria Ruh, and repeatedly opens up new views of the UNESCO World Heritage Upper Middle Rhine Valley with the legendary Loreley Rock or of the Rhine Bend and castles from different perspectives. The so-called Troll Trail is integrated with lovable and clever figures made of steel, which are not only enjoyed by children. Part of the sculpture trail created at the time is also experiencing a renaissance in the Traumschleife. At Wackenberg, the northernmost point of the loop, you can enjoy the view of Katz Castle, Maus Castle and Rheinfels Castle.

Now you need a little more bite, because there are still a few metres of altitude to climb before you reach the end of the tour in 4 km - over parts of the stairway path coming from St. Goar along the Lohbach and past the "Quetschehannes", an original from Biebernheim. Every now and then it is worth looking back at the Rhine valley. And if you want to climb the tower one more time at the end, you can certainly look back on a day full of variety.

Urbar: sports field on the K97 and Loreleyblick Maria Ruh

St. Goar-Biebernheim: sports field at the K100 and via Friedhofsweg

Free of charge:Brochure "Experience Dream Loops" with route sketches, altitude profiles, brief descriptions and tips for places to stop for refreshments for all 111 Dream Loops'andTraumschleifen overview map - light folding map with a rough overview of the location of all 111 Dream LoopsInformation and request on www.saar-hunsrueck-steig.de/prospekte Travel guides and books available for a fee in the shop at www.saar-hunsrueck-steig.de

The route is not suitable for prams. 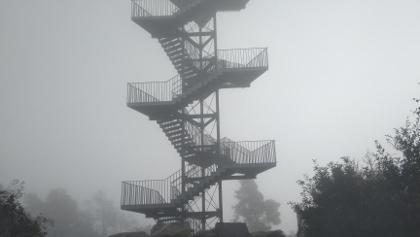 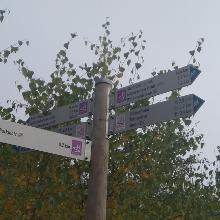 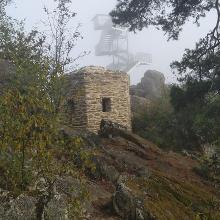 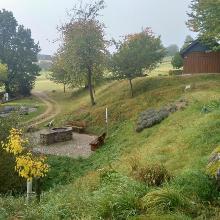