Responsible for this content
Romantischer Rhein Tourismus GmbH Verified partner  Explorers Choice
A wonderful circular and panoramic path between the valley of the lower Middle Rhine and the adjacent heights with many highlights from the volcanic past of the Eastern Eifel and very beautiful vantage points. The ascents and descents make the tour varied, but also require some fitness.
15.6 km
4:53 h
475 m
475 m

Brohl-Lützing is also the starting point of the historic narrow-gauge railway "Vulkan-Expreß". In the surrounding area there are other tourist highlights such as the Andernach cold water geyser, the Laacher See with the Maria-Laach monastery, the spring town of Bad Breisig with the Roman thermal baths, Olbrück Castle in the Brohl valley and much more. The historic quarries of the Hohe Buche volcano are part of the Eastern Eifel Geopark and have numerous explanatory panels.

Starting at Katharina Aalschokker in the Brohl-Lützing Rhine complexes, this varied circular hike initially leads a short distance south along the Leinpfad along the banks of the Rhine to where the Brohlbach flows into the Rhine. After crossing the brook bridge, the route continues through the subway of the Bundesstraße 9 and then along the Rheinstraße to the village square of Brohl with its artistically designed fountain. There you reach the Rheinburgenweg, which you follow for a longer stretch in the direction of Andernach up to the Rhine Heights. From the village square, keep left along Josef-Leusch-Str. until it joins Brohltalstrasse (B412).

Crossing this, you reach a gravel path leading uphill on the left, passing the workshop of the Brohl valley railway. After crossing the narrow-gauge track leading into the Brohl valley, a narrow path begins on the right of the entrance to a private estate, which zigzags up the Dicktberg. After about 40 metres you reach a covered lookout point, the Dicktberghäuschen, as it is called in the village. The effort of the continuing steep climb is always rewarded by the magnificent view of the Rhine and Brohl valleys. When you finally reach the levelled area of the Rheinhauptterrasse, the path becomes much flatter. After about 1 km you reach the Alkerhof (a former, stately farm) and continue past it to the historic quarries of the "Hohe Buche" volcano. The quarries, where you can marvel at traces of mining from Roman times to the Middle Ages, are part of the Volcano Park East Eifel. Lava blocks were mined for building purposes but also millstones. The origin of the volcano and its lava flow, which has flowed down to the Rhine, is clearly explained on numerous panels. Still following the Rheinburgenweg, the route takes you through a beech forest to Knopshof with its forester's lodge. Now it is a short stretch across the road to the south. Attention! About halfway between Knopshof and the Geishügelhof, which is within sight, our hiking trail branches off to the west onto a field path. It goes downhill again. After leaving the fields and meadows behind, you enter a small valley and follow a small stream to the left. On the easy to follow path you walk in the footsteps of the Cologne Elector Clemens August. The "Kurfürstenweg" leads down into the Pöntertal valley to the Tonissteiner Sprudel.   The path was laid out especially for him to get to his beloved Bad Toenisstein, because his cousin, the Princess Abbess of Essen, had forbidden him to pass through the Breisiger Ländchen under her control. You pass the factory premises of the Tönissteiner Sprudel. The Romans already enjoyed the mineral water rising here. Continuing on into the Brohl valley, and after crossing the Brohl valley road B 412, you arrive at Schweppenburg Castle and its mill, which is run by the Mosen family. The miller still traditionally uses the power of the water for grinding. On weekdays you can buy the mill products. Behind the mill, the path climbs steeply again past impressive Trass rocks and caves. The ascent takes some effort. Passing the former school country home of the city of Bonn, the path leads to the village of Niederlützingen (district of Brohl-Lützing). At first the path leads along Kirchstraße. Behind the cemetery turn right into Gartenstraße, past the rear entrance of the Lucenzia restaurant (open in the evening and at weekends). At the end of Gartenstraße turn right into Leyler Weg, which you follow to the end. Then turn right along a small path down to the open former lava pit of the Leilenkopf volcano, also called Leitenkopf or Leylerkopf. Impressive steep and high walls are evidence of the former mining of the coveted so-called foam lava, which was mainly used as frost-proof foundation material for roads. Gradually, nature is returning to the quarry. To get out of the lava pit again, a short ascent has to be made along a wide path to the east. Once back at the top, keep to the right. From a vantage point on a small hill you can enjoy a magnificent panoramic view of the Brohl valley, the Rhine valley as far as the Siebengebirge mountains near Königswinter or the Vinxtbach valley.  Back on the path, after a few metres you will come to a bench. There you turn left. The path leads along an avenue with apple trees downhill again. At the end of the path, turn right along a farm track paved with lawn grid stones. About 100 m later you leave it again to the left onto a small path into the hedges (easy to miss!) to cross a small valley and then across a meadow back uphill to the Lammertal chapel. This chapel still belongs to Niederlützingen and was used after the Reformation, sometimes by the Evangels, sometimes by the Catholics in the village who did not want to submit to the faith dictated by the sovereign. To the right of the chapel is a path which, after about 1 km, leads to the viewing platform of the "Reutersley" high above the Rhine. Looking up and down the Rhine, the hiker is rewarded with a wonderful panorama. Below, the Rheinburgenweg runs again, which you follow back down to Brohl. Take the Sauerhals road to Lützinger Straße and continue through a pedestrian tunnel under the railway to reach Bundesstraße 9, which must be crossed to reach the harbour. Passing the harbour, you return to the starting point in the Rhine facilities. In summer, a beer garden there offers the opportunity to fortify yourself after a strenuous hike. Other places to eat are the Gasthof "Zum Anker" and a pizzeria, both located on the Koblenzer Straße.

Arrival by train to Brohl station. From there it is only a few metres to the hiking trail.

Coming from Bonn or Koblenz on the Bundesstraße 9 to Brohl-Lützing or from the A 61 exit Brohltal on the B 412 to Brohl.

Do you have questions regarding this content? Ask them here. 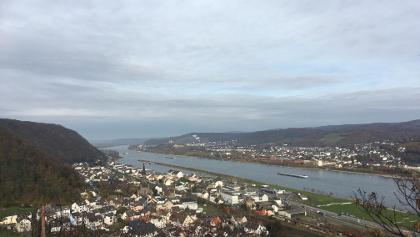 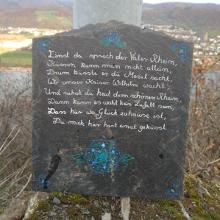 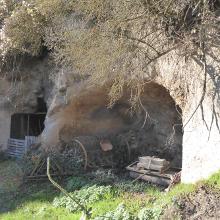 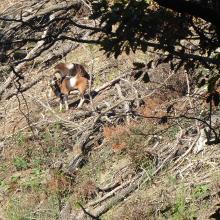