Der Leininger Burgenweg verläuft durch eine vielfältige Landschaft und verbindet die imposantesten Zeugnisse der Leininger Grafen: Burgen Altleiningen, Neuleiningen und Battenberg.
moderate
Distance 22.2 km
Duration6:00 h
Ascent429 m
Descent429 m
Highest point395 m
Lowest point175 m
In the Middle Ages, the Palatinate was the centre of European history. One of the  important ruling dynasties at that time were the Counts of Leiningen. Evidence of their dominating roles can be found along the Leininger Burgenweg that connects their family castles of  Altleiningen with the castles of Neuleiningen and Battenberg. The Leininger Burgenweg can be explored starting from all three castles.

The idyllic village of Neuleiningen, the fertile countryside around the Nackterhof, hidden rock formations and wonderful views of the Rhine Valley  as well as extensive forest areas offer an exciting and varied walk through this, the northernmost part of the Biosphere Reserve Palatinate Forest.

From the romantic town of Neuleiningen,  the path passes above the Eckbachtal, with its magnificent views of both near and far, towards Nackterhof. On the Sommerberg, a new path has been laid out leading past the idyllic hillside. Shortly thereafter, you can shorten the total route of 22.3 kilometres route by taking the former vineyard track leading down into the Spechttal and on the opposite side up to the Mittelberg. The trail is then only14.7 kilometres long.

But now back to the longer route. From Sommerberg the Leininger Burgenweg leads on past forests and fields towards Süßenhof. On newly-laid out trails hikers can explore bizarre rock formations, which are part of the new path. From Süßenhof you descend into the valley of Amseltal. Crossing other paths and a bridge you reach the valley floor and the Tränkwoog which is the start of the short climb up to the castle of Altleiningen. The hostel restaurant invites you to a hearty "Halftime Snack". Strengthened again, one goes towards Altleiningen where a unique 20-pipe well can be visited. Past the Eckbach, the path leads to the Zimmerberg and further into the valley of Langental. Along the foot of the Kupferberg the trail then takes you to up to the Kupferberg with its distinctive red sandstone formation "Kamelkopf”.

We now take the trail to the Bobenheimer Bannwald, which is surrounded by another ridge path. From two lookout points, which have been pruned for this purpose, you can throw glances at the monastery of Höningen and the castle of Altleiningen. From here, both the Pfälzer Weinsteig and Leininger Burgweg run along the same route, since this variant is much more attractive. Going over the Mittelberg, you will reach the Jägerskreuz. Now, on soft grass paths you leave the forest and arrive at a grand plateau, from where the entire Rhine Valley can be overlooked. Passing a magnificent view of the Donnersberg and traditional vineyards you will reach the village of Battenberg with its medieval church and castle. Taking a short detour, it is then possible to marvel at the geologically fascinating fulgurite flash tubes.

Along the northern edge of the Haardt the Leininger Burgenweg leads down to Kleinkarlbach and then back to the starting point of Burg Neuleiningen. In one of the many excellent restaurants you can finish the trail by enjoying some of the regional delicacies of Leiningerland. 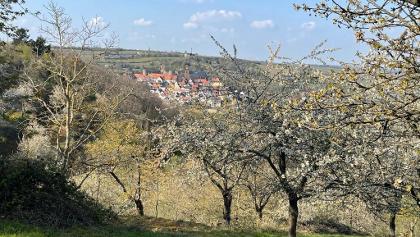 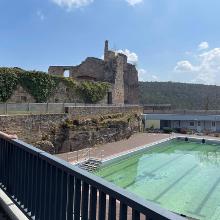 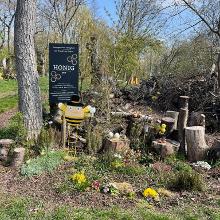 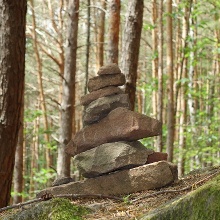