Responsible for this content
Pfalz Touristik e.V. Verified partner  Explorers Choice
This 20.4 km long trail got its name from the mountain and forest god Vosegus and combines the bizarre sandstone rock formations of the Rödelstein, Haselstein, Löffelsberg and Buhlstein.
open
difficult
20.4 km
6:45 h
625 m
620 m
The tour starts at the Lindelbrunn castle and, after an  exploration of the ruins, continues via the Hahnenhof, which offers a holiday camp for children and young people, to Oberschlettenbach. The idyllic place has a village well that is said to have a healing effect and keeps you young. From Oberschlettenbach we continue towards Haselstein. The Haselstein is a free-standing rock which, like many rocks in the Wasgau, is used as a breeding ground for falcons and eagle owls. The Haselstein is not the only rock on the tour. After the Löffelsberg which belongs to the local community Busenberg, has been reached, the path continues over the Buhlstein and the Buhlsteinpfeiler via Vorderweidenthal to Rödelstein. The rocks of the Wasgau line endlessly up to the horizon and offer a dream area for hikers and an Eldorado for climbers. But also an open history book!

This 20.4 km long trail got its name from the mountain and forest god Vosegus and combines the bizarre sandstone rock formations of the Rödelstein, Haselstein, Löffelsberg and Buhlstein. Along the way lie the ruins of the Lindelbrunn, which was built as an imperial castle to defend the Trifels in the 12th century.

At the beginning of the tour, you have the choice of starting either in Vorderweidenthal or in Oberschlettenbach. In addition, you can use the trail parking lot of the Naturpark Pfälzerwald at the ruins of the Lindelbrunn. Here is also the possibility to stop for a meal or stay overnight at the Cramer house which also offers accommodation.

We start the tour from the castle ruins of the Lindelbrunn, having explored them, we continue on to the Hahnenhof, which offers a recreation centre for children and adolescents. We then proceed to Oberschlettenbach, an idyllic village which has a village fountain from which one says that its water helps you to stay young and healthy.

From Oberschlettenbach we walk towards the Haselstein. The Haselstein is a freestanding rock tower, which, as with many rocks in the Wasgau, is used by hawks and owls as a breeding site. But the Haselstein is not the only rock formation on the tour. Once we have managed to go over the Löffelsberg, which belongs to the village of Busenberg, we continue to the Buhlstein and the Buhlsteinpfeiler through Vorderweidenthal to the Rödelstein. The rocks of the Wasgau stretch almost endlessly to the horizon and offer a dream world for both hikers and climbers. However it is also a history book, since from the Rödelstein we go back to the ruins of the Lindelbrunn, which after a frequent change of owners in the 14th century was finally split up and were renamed the Ganerbenburg. It was finally destroyed in 1525 during  the Peasants Revolution and after that was not rebuilt. 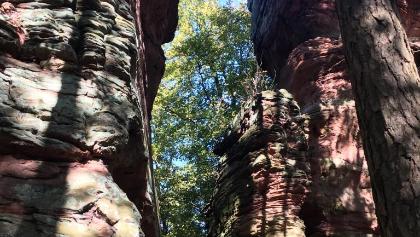 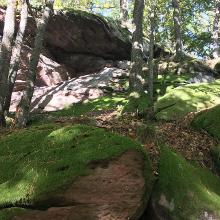 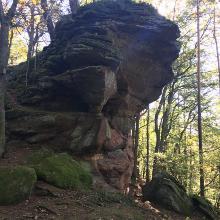 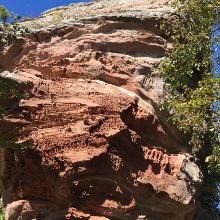