Responsible for this content
Mosel. Faszination Urlaub Verified partner  Explorers Choice
Detours in time and space.
difficult
Distance 23.9 km
Duration8:30 h
Ascent830 m
Descent830 m
The Moselsteig Trail is extremely varied and changeable along this stretch, yet also offers a number of short detours worth making: for example, one leads to a gushing waterfall in the Dortebach Valley nature reserve with its exotic micro-climate and another to one of the many places offering refreshments in the idyllic wine-producing villages along the trail. The Martberg Archaeological Park, which lies directly on the trail, takes you on a journey back in time to the authentically reconstructed buildings of the former Celtic-Roman Mountain Sanctuary. The countryside along this section of the trail also has a lot to offer hikers: the trail passes through wonderful high-level woodland, through vineyards and along river valleys until finally reaching its destination in Treis-Karden.

This section can be split into two or three shorter sections thanks to the excellent rail connections. The railway stations in Klotten and Pommern are situated directly on the Moselsteig Trail.

You start your long day of hiking – this stage is one of the longest of the Moselsteig Trail – from Carlfritz-Nicolay-Platz at the Moselle Bridge. From here, you pass the Old Thorhaus and continue along the Endertstraße towards the Talstation (Valley Station) of the chairlift. Along the way, the Moselsteig Trail crosses the railway line directly at the portal of the Kaiser-Wilhelm Tunnel, which was the longest railway tunnel in Germany up to the ICE era. Once you have arrived at the Pinnerberg chairlift, you can choose whether you would like to tackle the first descent of the day with the chairlift or on foot. If you decide on an ascent by foot, you cross the Endert stream over a footbridge; a path with steps takes you steeply uphill below the chairlift path towards Pinnerkreuz. Enjoy the wonderful view of the city and the Cochem Reichsburg! Also you should not miss out on a short detour to the Pinner Cross, which is on a rock pulpit – the most beautiful view of Cochem is guaranteed here. Just a few uphill metres later you have reached the top station of the chair lift and the restaurant on the Pinnerberg (note opening times).

The next stop is not far: After a steep ascent through the forest and a flat section on an asphalt road and a last uphill section, you reach the "Wild-und Freizeitpark Klotten". The Moselsteig Trail now leaves the parking area as a slightly descending path and enters the forest at the slope edge. At a mountain hut, you have a view of the Moselle Valley. The view from the nearby Rabenlay is much better, however, you will need to take a short detour for the main trail. A little further down from the path, you reach a covered rest area at the Schwedenkreuz – an ideal place for a refreshing rest in any weather! The slope edge allows a last view of Cochem. The Moselsteig Trail now cuts through a few serpentines of the road and reaches the Seitzkapelle, which stands idyllically next to large chestnut trees. From here, you can see Klotten, the town you will reach next.

Over the top-most vineyard path the Moselsteig Trail now leads to the Peace Cross and then into the forest. A steep path takes you downhill to the Klottener Kreuzweg. You reach the Wildparkstraße and continue along it past a chapel and into the town. However, you only reach the Moselle after a small detour. Through the vineyards below the castle Coraidelstein you reach the Richeza square, which also grants a beautiful view of the Moselle Valley. A loop through the vineyards then takes you back to the outskirts and via steps you reach the town centre. Now it's not far anymore to the railway station and the Haus Moselschiefer, which has a large parking area and a Tourist Information office.

Your next highlight is the Dortebachtal nature reserve. You will reach the entrance at a railway underpass following a section along the railway line and the highway. The small side valley is one of the driest and warmest along the entire Moselle. Special flora and fauna has developed on the steep slate slopes. You hike along the stream to the first wooden footbridge. Here, the Moselsteig Trail changes to the other side of the stream, and runs uphill over steep paths in the oak-covered slope. Once at the top, you should make a small detour (marked access route) to the viewing point Kasteschkopp: The covered rest area is great for taking a break and admiring the beautiful view of the Moselle Valley – it reaches from Klotten to downstream Pommern.

The next section takes you mainly through meadows, and you continue along the edge of the forest at the slope edge of the Dortebachtal. A little further you pass the Annischerhof and cross the field-covered plateau until the opposite edge of the forest. In the forest, stepping stones take you to the other bank of the Fellerbach. Now continue a little uphill in the forest canyon of the stream, and you have managed the first ascent! Straight through a wind-throw area and then along the edge of the forest, the Moselsteig Trail leads to Kail, which you have had a view of before. The unusually large church stands out in the small town. Right on the outskirts of the town, you continue downhill to the Schilzergraben, which cuts deep into the plateau and finally forms an impressive ravine. The path now continuous to the river for some time, and then reaches the vineyards after a small intermediate climb at the Moselle Valley slope edge. Through the newly cleared slope you now walk parallel to the Moselle Valley through the vineyards. Passing the Pommern Sundial, you will soon reach Pomerania via the Kreuzweg. The railway station of the town is connected via a short access route.

After you have crossed the Pommern stream, your ascent already starts in the village – and then on old vineyards continues steeply uphill, with each altitude metre offering a better view of the Moselle Valley. The second part of the ascent leads you through the forest, which clears at the plateau of the Martberg. Once at the top, you will come across a partially reconstructed Roman temple complex and rebuilt Celtic houses - take some time to visit them in peace! If you are looking for a rest area with a view, take the short access route to Fahrlei viewing point. The Moselsteig Trail now continuous over winding paths to the slope edge, where some beautiful views of the Moselle and Treis-Karden open up. The descent leads along paths, parts of which are lined by boxwood trees, to the St. Castor view and the hut at the Josefinenrast. Both allow a beautiful view of the St. Castor Basilica in Treis. Continue on a moderately sloping former vineyard path with a relaxed view of the entire Moselle Valley at Treis-Karden. From a hairpin, you continue on a little steeper part down to the village. This stage ends in the St. Castor Straße, just 100 m from the railway station.

There are regular connections. Please note that during the school vacations of Rhineland-Palatinate / Saarland, at weekends and on public holidays there may be restrictions in the frequency! Please check the daily timetable on the website of the Verkehrsverbund Rhein-Mosel (VRM):

Starting point: Cochem via the B 49

Cochem: There is a charge for most of the parking spaces in Cochem. There is a large car park behind the railway station.

Treis-Karden: There is a car park close to the railway station.

The entire route is divided into 3 maps:

The hiking guides and the maps are available in bookstores or on the website https://www.visitmosel.de/wandern/service-infos-tipps under the heading “Ordering brochures”.

Things to Bring if Staying in a Mountain Hut 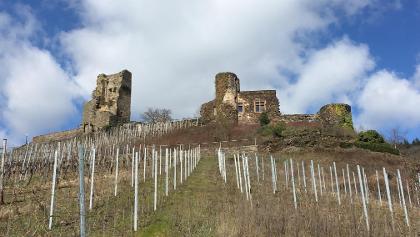 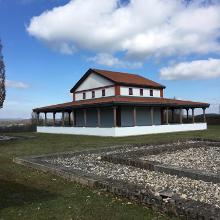 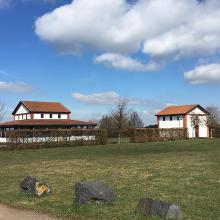 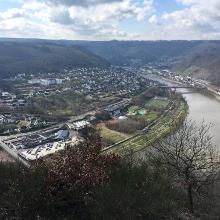