Responsible for this content
Pfalz Touristik e.V. Verified partner  Explorers Choice
The Pfälzer Höhenweg trail offers all kinds of variety, not just because the 112km long trail goes higher than any other trail in the Palatinate.
open
difficult
Distance 114.6 km
Duration33:00 h
Ascent3,414 m
Descent3,321 m
Stage 1: Winnweiler to Dannenfels
On the first stage of the Pfälzer Höhenweg trail we are in former mining territory. The 16km long trail takes us from Winnweiler to the former mining village of Imsbach, the Celtic gardens at Steinbach and finally to the health resort town of Dannenfels.

Stage 2: Dannenfels to Bastenhaus
The second stage brings us higher – from Dannenfels we climb the 687m high Donnersberg, the highest mountain in the Palatinate, and continue via Marienthal to the Bastenhaus Hotel-Restaurant.

Stage 3: Bastenhaus to Rockenhausen
From the Bastenhaus hotel we continue on to the highest village in the Palatinate, Ruppertsecken, where there is a wonderful view of the region. We then descend to our end destination of Rockenhausen.

Stage 4: Rockenhausen to Obermoschel
A selection of museums in Rockenhausen, the remains of a Roman settlement and impressive castle ruins await us on the fourth stage of the Pfälzer Höhenweg trail. Around 19km of walking will take us from Rockenhausen across the hills to Obermoschel, the smallest city in the Palatinate.

Stage 5: Obermoschel to Meisenheim
At only 12.5km, the fifth stage is the shortest section of the Pfälzer Höhenweg trail. From Obermoschel we hike over the Kahlforst hill to Callbach and on to the historical old city of Meisenheim.

Stage 6: Meisenheim to Lauterecken
The sixth stage of the trail is 14km long and brings us from the enchanting old town centre, with its timbered houses and historical buildings, onto an old Roman road towards Lauterecken.

Stage 7: Lauterecken to Wolfstein
The last stage of the Pfälzer Höhenweg leads from Lauterecken via Lohnweiler through the shady forests of the Königsberg massif to Wolfstein. The 21km route includes the romantic castle ruins at Altwolfstein and Neuwolfstein.

Especially in the autumn it is also important to remember that leaves lying on the ground can conceal irregularities, such as roots, rocks or holes in the path. Following storms, trees can have been uprooted or have branches hanging down. Such path impairments have to be expected when using such trails . Especially in adverse weather conditions, it may occur that the trails and paths turn into muddy and slippery passages. Path impairments of this kind have to be expected when you go out for a hike. Not all rocks or slopes are secured with ropes or railings and sure footedness is required. Should you be of the opinion that these are not accessible to you then you should try and get around them.

Stage 1: Winnweiler to Dannenfels
We begin the first stage of the Pfälzer Höhenweg trail among the picturesque timbered houses of Winnweiler. The first ascent brings us to the Chapel of the Cross in Winnweiler, which is worth visiting. This pilgrimage church was built in 1728 and overlooks the beautiful town from the Kreuzberg hill. Taking the 'Donnersberger Bauernlehrpfad' (a path through farmland) we reach the former mining village of Imsbach, where a visit to the mining museum is recommended. Leaving the village on the Grubenlehrpfad (mining trail) we see several information boards which tell us about mining in this region. If you want to learn more, visit the 'Weiße Grube' and 'Grube Maria' mines. The trail continues through thick forest to Steinbach and the Celtic gardens. After a visit to the interesting Celtic village we continue to Haus Wildenstein for coffee and cakes to keep our strength up for the rest of the trail. The nearby rocks of the ‘Reißender Fels’ are also worth a detour. Shady forest paths then lead along the eastern slopes of the Donnersberg, passing the Kastanienhof guest house, before arriving in the health resort town of Dannenfels, where the first stage ends.

Stage 2: Dannenfels to Bastenhaus
The second stage of our hike begins in the health resort town of Dannenfels and brings us on a steep ascent to the Donnersberg. We hike along idyllic woodland paths, past the Moltkefels and Hirtenfels viewing points, up to the remains of a Celtic ring fort, which was built on the Donnersberg in 150 B.C. Enjoy the view from the nearby 27m high Ludwig tower. In good conditions, you can see right across the Rhine plain to Frankfurt from the top of the tower. Take a break in the Waldhaus or Keltenhütte café-restaurants. Continue to the King's Chair, the highest point in the Palatinate, and enjoy a magnificent view over the forested plateau and the Donnersberg region. We then begin the steep descent through thick forest to the picturesque village of Falkenstein. The imposing ruins of Falkenstein Castle, which are also used as an open air theatre, overshadow the houses. Here at the foot of the Donnersberg, along pretty paths at the forest edge, we reach our destination of the Bastenhaus Hotel-Restaurant. Enjoy a good meal on the terrace of this traditional hotel as well as the stunning view of the highest mountain in the Palatinate.

Stage 3: Bastenhaus to Rockenhausen
The third stage of the trail begins at the almost 300-year-old Bastenhaus hotel. We can build up our strength on the terrace of this traditional hotel before continuing our hike. The trail continues upwards on shady forest paths to Ruppertsecken. The highest village in the Palatinate is 498m above sea level and offers a magnificent view of the nearby Donnersberg. We leave the village and begin the descent to the sleepy village of Würzweiler, which is nestled between lush green meadows and wooded hills. Passing through Wittgemark we continue on an old Roman road to the idyllic Enzelbach Valley before we descend into Rockenhausen. We bring the stage to a gentle close with a wander through the picturesque village, with its timbered houses, a visit to one of the many museums or perhaps a pause for refreshments in the Schlosshotel.

Stage 4: Rockenhausen to Obermoschel
The fourth stage of the Pfälzer Höhenweg trail begins in Rockenhausen, where there are four interesting museums to visit. After a short walk we reach the remains of a Roman settlement 'Villa Rustica' nearby Katzenbach, which is one of the most complex excavation sites in the Western Palatinate region. A curving path brings us to the 489m high Stahlberg, with its information boards to tell us about the mining that once took place here. You can end your hike here if you wish (accommodation or bus connections are available). Leaving the Stahlberg, we take the easy trail through forest and fields towards Obermoschel. The ruins of Randeck Castle, which rise above Mannweiler-Cölln, are worth a detour and offer a great view of Rockenhausen, the Alsen Valley and the Donnersberg. The trail then takes us past the wine-growing areas of Moschel and Alsenz to the romantic ruins of Moschelland Castle, which sits on the peak of Landsberg mountain. The castle has been in existence since 1130 and was almost completely destroyed by fire in 1689, with only an imposing tower and some of the walls remaining today. Just below the castle is the castle hotel where we can stop for a rest and enjoy the view. From here, it's not too far to our final destination of the picturesque old town of Obermoschel.

Stage 5: Obermoschel to Meisenheim
After a leisurely stroll through the narrow streets of Obermoschel's old town, we leave the smallest city in the Palatinate and hike up to the Kahlforst plateau. Accompanied by great views of the mountainous northern Palatinate region, the trail leads us through lush green fields across the Schiefersfeld plateau and after a steep ascent, to Callbach. Passing the church, we cross the village and can stop for a rest in the 'Zur Traube' inn. We then leave the village and walk on the wooded hillside, following the Callbach Valley to the North West. On the other side of the ridge we reach the River Glan, once the border between Prussia and Bavaria. We cross the bridge over the river and pass through the old city gate (‘Untertor’) to the picturesque old town centre of Meisenheim, which looks almost as it did in the 14th century.

Stage 6: Meisenheim to Lauterecken
Among the romantic timbered houses in Meisenheim's historical town centre, we stroll to the late Gothic castle church, where a bridge leads us over the Glan and out of the picturesque town. A narrow woodland path leads up to the viewing point Juchhe where you can enjoy a wonderful view of Meisenheim and the Glan Valley. Passing the Gustav-Merck-Platz square, where a barbecue area tempts us to stop, we walk through a small collection of allotments and cross the Glan once again. An old Roman road leads us over the ridge to a circular ring fort on the Marialskopf hill, which was once used as a refuge. We then walk downhill through the forest until we reach some narrow steps which bring us to the picturesque town centre of Lauterecken. We can bring our hike to a relaxing close in one of the restaurants here.

Stage 7: Lauterecken to Wolfstein
We begin the last stage of the Pfälzer Höhenweg trail in the picturesque historical town centre of Lauterecken. We follow the river for the first few kilometres and at Lohnweiler climb up out of the Lauter Valley onto the plateau. An easy trail through forest and fields leads us to the picturesque Altwolfstein and Neuwolfstein castle ruins, which dominate the slopes of the Lauter Valley. The trail continues through thick forest to the so-called King's Country. The Leienberg and Hahnenkopf hills also belong to this tree-covered massif, in addition to the Königsberg (568m). At the southern end of the King's Country we reach the 546m high Selberg. As well as the Selberg hikers' hut, the hill boasts a steel viewing tower, built in 1969, with a fabulous panoramic view. We begin the final ascent in shady forest and hike through lush meadows and fields to Wolfstein in the pretty Lauter Valley. We enter the town at the southern end and walk towards the town hall square to reach the train station, which marks the end of the Pfälzer Höhenweg. From here, you can join the Veldenz and Remigius trails, which both lead through the heart of the Palatine Uplands.

By train or bus to Winnweiler

A63 to the Winnweiler exit, then continue on the B48 to Winnweiler 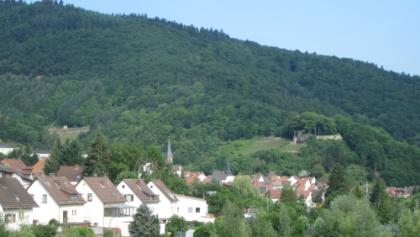 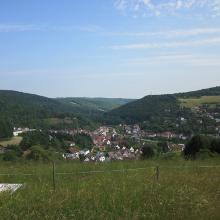 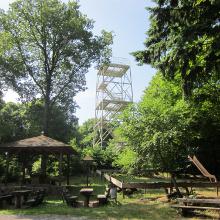 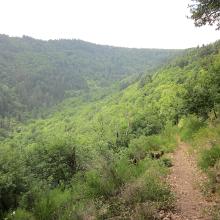 On the first stage of the Pfälzer Höhenweg trail we are in former mining territory. The 16km long trail takes us from Winnweiler to the former ...

The second stage brings us higher – from Dannenfels we climb the 687m high Donnersberg, the highest mountain of the Palatinate, and continue to ...

From the Bastenhaus hotel we continue up to the highest village in the Palatinate, Ruppertsecken, and enjoy a wonderful view of the region.

A selection of museums in Rockenhausen, the remains of a Roman settlement and impressive castle ruins await us on the fourth stage of the Pfälzer ...

At only 12.5km, the fifth stage is the shortest section of the Pfälzer Höhenweg trail. From Obermoschel we hike over the Kahlforst hill to Callbach ...

The sixth stage of the trail is 14km long and brings us from the enchanting old town centre of Meisenheim, with its timbered houses and historical ...

The last stage of the Pfälzer Höhenweg trail leads from Lauterecken via Lohnweiler through the shady forests of the Königsberg massif to Wolfstein.