Responsible for this content
Pfalz Touristik e.V. Verified partner  Explorers Choice
The second stage of the Pfälzer Weinsteig trail, the longest of the three new approved hiking trails in the Palatinate, leads us from the pretty, 750-year-old town of Neuleiningen, with its vineyards and castle, to the spa town of Bad Dürkheim. Along this interesting trail we can discover a Germanic ritual site and a Celtic ring fort as well as the highest Bismarck Tower in the Palatinate.
moderate
Distance 17.6 km
Duration5:00 h
Ascent323 m
Descent453 m
The 17.5 km long second stage reveals the full beauty of the Palatinate. From the 750 year old wine and hillside village of  Neuleiningen up to the spa town of Bad Durkheim you only have to keep your eyes open! The Burgruine Neuleiningen and the parish church of St. Nikolaus form the starting point. Along romantic streets, the trail leads downhill to the first vineyards. After a short climb you should not miss the detour to the castle ruins of the Battenberg and the impressive geological tubes in the nearby sandstone formation. Protected by trees the trail now leads to the forest tavern  of Waldgaststätte Forsthaus Lindemannsruhe and to the 40 m high tower of the Bismarckturm. Passing the Geiersbrunnen and the Germanic cult site at the Teufelssteinplace,  you now can explore the 2,500 year old ringed wall of the “Heidenmauer”. Passing the Kaiser Wilhelm Memorial  you arrive at the Kriemhildenstuhl, an old Roman quarry. The rocky platform is as magnificent as the view over the Rhine valley and the Odenwald. After a short descent you reach the Römerplatz in Bad Durkheim.

Especially in the autumn it is also important to remember that leaves lying on the ground can conceal irregularities, such as roots, rocks or holes in the path. Following storms, trees can have been uprooted or have branches hanging down. Such path impairments have to be expected when using such trails . Especially in adverse weather conditions, it may occur that the trails and paths turn into muddy and slippery passages. Path impairments of this kind have to be expected when you go out for a hike. Not all rocks or slopes are secured with ropes or railings and sure footedness is required. Should you be of the opinion that these are not accessible to you then you should try and get around them.

The long-distance trail begins among the historic walls of the ruins of Neuleiningen Castle (1) and the parish church of St Nikolaus. Following the cobbled streets and stairways, lined with pretty timber-framed houses, we leave the town and walk down into the Neuleiningen Valley. Passing through sunny vineyards and a shady rest spot under a cherry tree (2), we eventually arrive at the small village of Battenberg. It is worth visiting the ruins of Battenberg Castle, with a lovely view across the Rhine plain, or taking the path to the 'Blitzröhren', an interesting geological feature.

We then walk past the last houses at the edge of the village and into the forest. The next few kilometres of the trail follow shady, gentle forest paths until it reaches the Lindemannsruhe foresters' lodge and restaurant (3). From here, it's not far to the imposing, 40m high Bismarck Tower (4) on the Peterskopf hill. Passing the Geier springs (5), we follow the forest paths downwards before a short ascent brings us to an old Germanic ritual site on the Teufelsstein mountain (Devil's Stone) (6) with a large boulder on top of it which carries the same name as the mountain. According to legend, the holes in the stone were made by the furious devil himself. Shortly after this we find a ring fort in the forest, the so-called Heidenmauer (Heathen Wall), which was built by the Celts in around 500 B.C.

Passing the Kaiser Wilhelm monument, with its magnificent view of the ruins of Limburg Abbey, the trail continues to the 'Kriemhildenstuhl' (7), the best preserved Roman quarry north of the Alps, with its ancient inscriptions. The fantastic view from the 100m x 200m rock platform reaches from the Rebenmeer wine-growing area and the Rhine plain to the Odenwald mountain range and the Black Forest. After a quick stop at another viewing point, the trail takes us down into the attractive spa town of Bad Dürkheim, which has the largest wine barrel in the world and the second longest graduation tower in Germany. 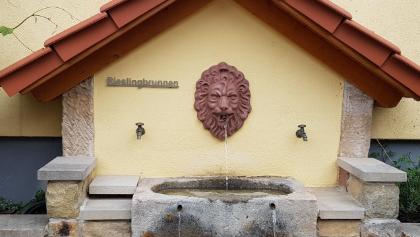 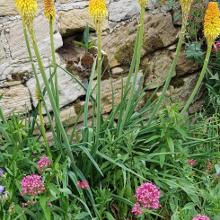 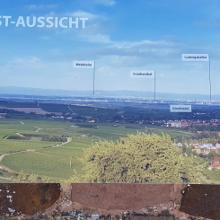 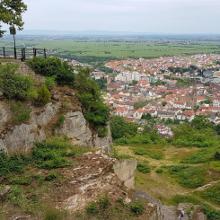