Responsible for this content
Romantischer Rhein Tourismus GmbH Verified partner  Explorers Choice
The first stage of the Rheinsteig takes us from the historic town hall on the market square in Bonn along the level banks of the Rhine. On the second half of our tour we then head for the hills of the Siebengebirge.
open
moderate
Distance 22 km
Duration7:00 h
Ascent597 m
Descent470 m

Legend has it that a dragon would lie in wait in his cave for passing ships and breathe fire on them.    One day his fire hit a ship loaded with gunpowder. There was a huge explosion – and the evil dragon was then nothing more than a legend. According to the Saga of the Nibelungs, it was Siegfried who killed the dragon. When you listen to these stories, it's hard not to imagine the hot, fiery breath of the dragon on the back of your neck ...

The first few kilometres are perfect for warming up, as you initially walk upstream along the banks of the Rhine with no noticeable incline. From Küdingshoven the Rheinsteig then starts to wind up into the Siebengebirge, with several metres in altitude to be mastered en route. Despite the climb, this shady section is also easy to manage in sunny weather.

Impressive Drachenburg Castle is well worth a visit.

The first stage of the Rheinsteig starts on the market square in Bonn. It passes the University of Bonn on the banks of the River Rhine and the landing stage of the Rheinnixe ferry (please check times on http://www.rheinnixe.com.  There’s an alternative route across the Kennedy Bridge.)

Next, the post office tower on the riverside in Bonn points the way to the company premises of T-Mobile in Ramersdorf, taking you through the expansive park lining the Rhine on your way. The trail then cuts away from the river. You arrive in Küdinghoven, pass the church, cross the A59 and after your first steep ascent reach the Foveaux Pavilion picnic area. After a short break you then wander through a pretty stretch of deciduous forest to the hikers’ car park at Dornheckensee. The ensuing route along the edge of the plateau has many wonderful viewpoints in store, with the vistas from the lakes of the Dornheckensee and Blauer See the most spectacular. The quarries are completely filled with water and have become an important spawning site for various species of amphibian. Although swimming here is forbidden, some people are bold enough to jump in regardless – and some don't make it out alive.

About half a kilometre beyond the Dornheckensee a skywalk has been erected which besides the grand panorama also has signs providing lots of interesting information on the Siebengebirge.

The route takes you on the Kuckstein, a plateau up above a number of former basalt quarries. It then again turns away from the Rhine Valley and reaches the edge of Oberkassel. Up above the vineyards you then come to the Rheinblick viewpoint. On towards Heisterbach Abbey you cross the Mühlen Valley. The former Cistercian monastery, with its spacious park and imposing chancel ruins, is popular with day-trippers. Beyond the abbey your ascent begins, past Fritz-Rösing-Platz and up to the Petersberg, one of the region’s seven distinctive peaks. German post-war history was made here: in 1949, the Petersberg Agreement was signed in the hotel which later served for several decades as a guesthouse for the Federal Republic of Germany. This agreement was the first step towards the sovereignty of the German republic.

The trail continues through the Mirbesbach Valley to the next rest area, the Walter Guilleaume Hut. Before the hut you cross the road between Königswinter and Margarethenhöhe (Siebengebirge Association Info Centre). A little further on you reach a viewing pavilion on the Geisberg before the trail winds in a long loop past the Schallenberg. At the last restaurant (Milchhäuschen) before Königswinter the signs point the way to the nearby Nachtigallen Valley, at the start of which the main trail ends and the access path begins. If you don’t opt for the idyllic Nachtigallen Valley, you can first visit the recently restored Drachenburg Castle and then either follow the tarmacked road down to Königswinter or gently chug down to the valley on the Drachenfelsbahn, the oldest cog railway still in operation in Germany.

There are many long-distance and local train connections to the main station in Bonn. From here, the way to the main Rheinsteig trail is marked by yellow access signs. The trail starts on the market place directly outside the town hall.

After your hike, the best way back is to take the direct number 66 tram from the Rhine promenade in Königswinter to the main train station in Bonn.

The A565 motorway goes directly into Bonn. Bonn can also be reached on the B9 and B42. Follow the signs to Bonn-Zentrum (city centre).

There are several car parks in the middle of Bonn (fees charged). The underground car park beneath the market place is closest to the starting point of the Rheinsteig. 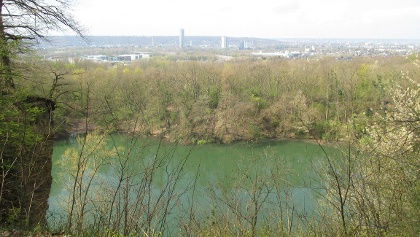 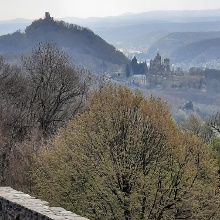 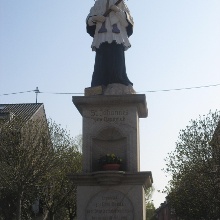 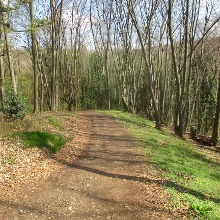