Those who have not yet provided themselves with food for the hike can do so on the way through the town. On the route itself, as an exception, none of the numerous huts in the Palatinate Forest will be visited, but the numerous vantage points offer a beautiful backdrop for a relaxing rest.

The Friedensweg is included in the hiking trail "Aussichten der Tuchmacher" (Views of the Clothmakers). If you wish, you can hike this beautiful alternative to the main trail either on the way there or on the way back. This section is approx. 1.3 km long and leads you past orchards up to Friedensplatz. There you will not only find a red sandstone with a dove carved into it, but also a picnic area with a beautiful view of the cloth-making town of Lambrecht (Pfalz).

Especially in autumn, also be aware that leaves lying on the ground can hide bumps, roots, stones or holes in the path. After thunderstorms or rainstorms, trees can still fall over or branches can fall down afterwards. Especially in adverse weather conditions, muddy and slippery passages can occur on natural paths. Not all rocks or precipices are secured with ropes or railings. Surefootedness is required in places. You have to expect this type of path impairment when you undertake a hike. If you are of the opinion that certain sections of the trail are not passable for you, you should avoid them.

We endeavour to announce on this platform any closures that occur due to forestry work or hunting parties. Nevertheless, there are situations where trails are closed and we may not have been informed. If you unexpectedly encounter a trail closure or diversion, please follow the instructions for your own safety.

The trail starts at Lambrecht(Pfalz) railway station, which can either be reached by public transport or you can park your vehicle in the neighbouring car park. From there, the route leads down into the town and via Schulstraße past Friedrich-Ebert-Platz, up Markstraße. After the monastery church, we continue in the direction of Grabenstraße. There you will find the entrance to the Friedensweg. We follow the Friedensweg and then continue along the Aussichten der Tuchmacherweg. In the first left-hand bend of the gravel path we leave it on a rather steep uphill path, which leads us after a few hundred metres to the beginning of the "Tugendpfad". The Tugendpfad leads us further uphill to the "Stadter Bank" trailhead. The first altitude level is reached and on a now wide, natural path, the trail leads us almost without any further ascent to the "Schönen Aussicht" (beautiful view) at the "Wildsaukopf" (wild sow's head) and the Wellenliegen. The two names quickly become clear due to the view over the Lambrechter and the rocks resting on the slope. A first rest on the inviting wave loungers fits in well with the schedule. Let your legs dangle and let the view wander out over the city to the west or towards Weinbiet.

We continue the hike on a wide path without any major incline at first, until we turn sharply left and clearly uphill at the next path junction after a few hundred metres. In a loop, the path leads us to the next level and the next two path junctions to the left are ignored. Gently ascending, the path now leads on the north side of the Schauerberg to the "Umsetzer" viewpoint. Here, too, a seating area invites you to take a rest and the view from this higher vantage point provides a new view down to the old cloth-making town in the valley.

After the "Umsetzer", the description of the route that we know from the "Wellenliegen" is almost repeated. The trail continues to climb gently until it turns sharply to the left and goes uphill. But here, too, the gradient is finite and we have reached the ridge. The terrain now slopes down almost on all sides and we maintain the direction to the Kaisergarten along enchanted stone formations.

The Emperor's Garden was laid out on 15 August 1804 as a fairground for the ordered celebration of Napoleon's appointment as hereditary emperor on the cattle shelter "Alte Unger". At 519 metres, the Kaisergarten is the highest point in the Lambrechter Klosterwald. To reach the remains of the Alte Unger, simply follow the sign across the forest. Nowadays, low stone walls can still be seen.

Turn right onto the path (follow the markings) and cross two forest paths. On the way, the view sweeps over the heights of the Pfälzerwald. Turn right onto the marked road ("Lambrecht über "Dicker Stein"-Turm") and turn left before the round table. About 100 metres further on, we turn sharp left onto the grass path. At the Stone of Movement, descend the stairs to the Dicker Stein Tower.

Thick Stone Tower: The first pavilion on the Thick Stone was built as early as 1896, but fell into disrepair over time. In 1933, work began on building a lookout tower here. In 1995 it was so dilapidated that it had to be closed. However, many helpers were found who restored the tower.

We go down the path in front of the tower and turn right at the junction; we now follow the markings again. Turn left onto the road and after about 220 metres turn sharp right onto the path. At the end of the path, turn right onto the forest road.

At a crossroads, turn left and walk down to the cemetery. Continue to follow the trail markings. Walk along the road. Walk down the paved road and past the school. Turn right into the main road and left into Bahnhofstraße. This hike ends again at the railway station.

For our hiking tours we recommend the following equipment as standard: 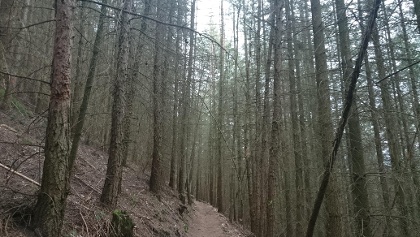 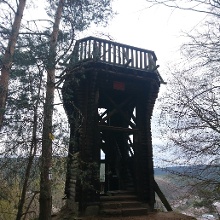 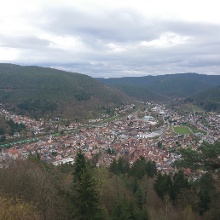 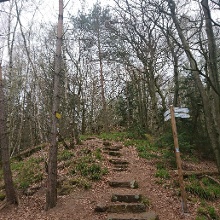